If you were to ask me what the scariest thing I’ve ever done last month I would probably have said  leaving the familiarity of my home country and moving to the UK & US. Fast forward to now & I have just officially done the craziest, scariest thing in my life. I got completely naked on prime time British Television.

Didn't think I could do this. But just went right ahead and proved myself wrong. #noregrets 📺🇬🇧😝

Did I just wake up one day and think. Ok I’m gonna get naked on TV? Well…

It all started when I was over at my best friend Chloe’s flat in Bristol. Chloe always has the TV on in the Background, She was telling me about this new naked dating show called Naked Attraction. I had not long finished filming Undressed , another raunchy British TV show. [Undressed does require you to take your clothes off but not completely naked.] Chloe showed me the show & I was genuinely shocked at what I was seeing. I haven’t watched TV for years, and have probably only watched about 3 hours of TV in the 2 & a half years I’ve lived in England. I straight away thought WTF is going on. It was intriguing viewing though & at the same time quite interesting & entertaining! Laughing together Chloe joked that I should do this show next. I straight out said No, that is legit the last thing on earth I would do! I’m confident but not that confident!

A few months later I seen an advert from one of the casting producers on Facebook, I had been friends with him since he stalked me down and encouraged me to apply for another British show called Take me out. I was in Australia at the time of that shows filming so didn’t bother. The advert looked a little something like this. 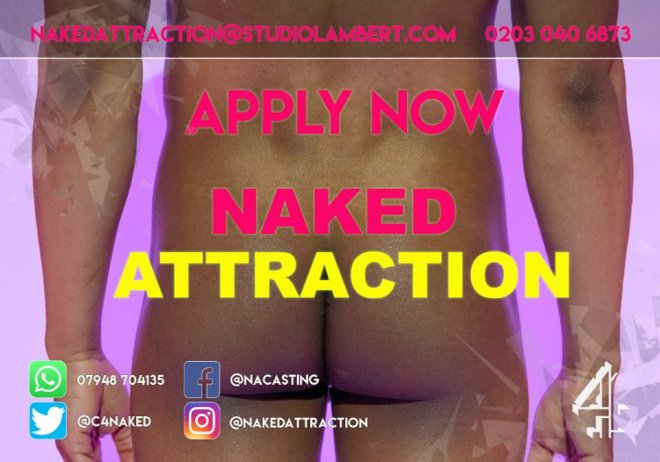 Due to the massive success of season one , It had instantly been renewed for another season! It was rating really high with millions of brits tuning in to laugh and cringe.

I had gave it some thought, a lot actually & without sounding too cocky, I knew if I applied I would most likely get on it. I knew they would be interested in a confident Bearded 20 something year old Australian that hasn’t man-scapped in over 3 years. I knew they would be looking for a diverse range of people. I watched the rest of the episodes & thought this could be fun! I really liked the host Anna, I thought she was hilarious. So I went right ahead and sent a few cheeky photos. I applied as a bi-sexual man that prefers men.

I’d received a response the next day saying that they would love to speak to me. I responded and asked when filming was as I was due to go on holiday for a month in Australia. They gave me the dates and said for me to contact them again when I’m back in the country. I had a nice month in Australia to really think about what I’m about to get myself into. I had talked about it with close friends and family, to mixed reactions as expected! Although I knew I could make my own decisions, their opinion did matter to me.

I mentioned the format of the show, and showed off some screen grabs. I said how its a really fun, fascinating show that contains full uncensored nudity that would never air in a country like Australia. Its a world first created by the same production company that thought of goggle-box & undercover boss.

On the plane back to the UK, I thought about it again. I was really focusing on the pros and cons and what thoughts were coming to my mind. The thought of it truly did scare the shite out of me. I remembered back to one of my favourite quotes from Bear Grylls, “Life begins at the end of your comfort zone”. Also the ” Try and do things that scare you” . I am a self confessed experience junky & I absolutely love being out of my comfort zone. I have always lived with a you only live once kind of attitude. I pondered whether this could ruin my life or not. Would I ever be able to live it down?

So I arrived back in the UK, contacted them to let them know I’m back in England.

I was swiftly offered a time slot to come to the London studios for an audition. I had been away from Chloe for a month so decided to make it a little London Adventure, I had wanted to see where Chloe was raised and meet her parents for a while now, So we were able to make all that happen while casually getting my clothes off in the centre of London.

It was a fairly bizarre experience, it was held at Studio Lambert in Denmark street which is smack bang in the centre of London, It wasn’t at a TV studio or anything, this is just a flashy shiny big office. I arrived and had to fill out more paperwork then my visa applications in USA & UK put together. Signing my life away quite swiftly, I was then ushered up stairs where there was a full floor of staff working away, off course every single one stared as I was taken in to a meeting room where the windows had been covered in non transparent paper. Inside that meeting room was a white wall, 1 camera, 1 big light & two men. One was a producer on the show, and the other was the show casting researcher that had found me online. Both lovely men. As expected I was asked a lot about my dating history, life and basically anything else. Half way through it was time to take off my clothes. Something I knew I had to do, It didn’t really bother me although I was a bit embarrassed because the nerves and the coldness of London had made my nut suck shrivel into my body & my willy to turn into a wrinkled elephant trunk. I just laughed and carried on talking to two complete strangers about whether or not I like pubic hair, ect. Although I was auditioning for Pan/Bisexual round, We mainly talked about my history with boys. I let them know I had been with more men in my life and prefer men but am open to being with  female and have in the past.

After a few very awkward poses, which included me standing still while they zoom up on my little jimmy & my hairy ass, I was asked to do some modelling/blue steel action. Something I had never really done naked, felt a bit awkie.

I left the audition feeling confident. I knew they found me interesting and I knew that theres a high chance I’ll be on the show.

A week later I received a phone call. It was to say the network and producers really like me and would like me to be on the show. I asked them whether I’d be a picker or in a box, as I had previously made it clear that I am only interested in doing the show If I am a picker. They couldn’t let me know at that stage as they were still finalising all the casting.

I was told I would be on the gay episode which I was fine with. I then received news that they had already secured the pickers for the gay episodes. I was then asked if I would be interested in going on a Bi or Pan-sexual round. Which I actually would have preferred to be. I thought it would be a lot more interesting choosing between male & female!

So I was invited back to London to film some more clips about my history with women and what It means to be Pansexual. I had let them know I have never been a fan of labels , although If you were to label me I would fit more into the label Pansexual.

So what is Pansexuality?

Pansexual is a term where someone is attracted to all genders! Therefor male/female, gay/straight/bi/trans & even people that don’t feel they fit into a gender. To me it basically means I have the ability to love and be sexually attracted to anyone! It doesn’t matter if they have a willy or fanny basically. I could like a man with feminine traits, or I could like a tom boy with a vagina.

The term was fairly new to me, in-fact I had only heard about it about a year ago when Miley Cyrus came out on social media as Pansexual. Growing up people had always tried to put me in a box and label me. Everyone including myself knew I was a little different. I guess gay was the easiest and most generic label. Everyone would call me that from my siblings and their friends to my father and his friends. I guess I had just accepted this label before I even knew If I was or not.

Naked attraction at the time had not yet done a Pansexual round. It was exciting that I would be the first! It meant that I could even have a transgender person in one of the boxes. I had never dated a trans before but am certainly open to the experience. The thought of having a trans in my episode was exciting to me!

What are your reasons for doing this? What goes through someones mind when choosing to do something this bizarre & brave? 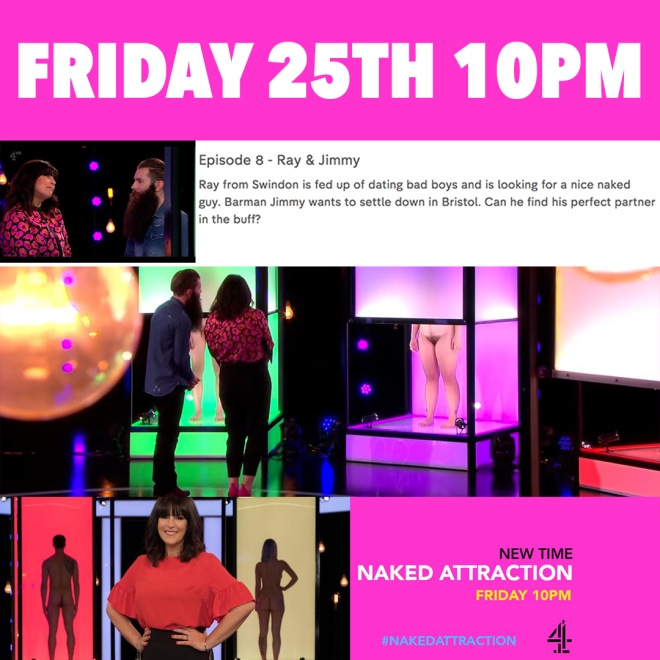 Happy 30th to my beauty of a lil sister Emma!! Love being your baby bro 😆. So proud of you and your accomplishments, such a hard working mother , wife and business babe. What a fab night and few days together, Cannot wait to treat you to Harry Styles 😝 💕 xoxoxox @emmajensen____
Stunning
Can relate, obvs
Thank you for my gorgeous gift @saviiiiii97 & Marlene💃 🐆 ❤️ 🖼️ 🦋 🎶
Time stamp says 5:44am. Ocker insisted we stay up until sunrise!! What a month/year @ the Vine 💀 💀🐸💀🐸💀🍻🥂🍷🐸💀🐸💀💀🍷🥂🍻💀🐸
Christmas at baby sis gorge new house ❤️ @emmajensen____
😆🚨 ‼️ We just recently cleaned out our Chim chiminey, chim chiminey, chim chim cher-ee to make way for ye olde Santa Claus. Although it seems to have made way for our fluffhead neighbourino Jilly Bean!
Gay boiz be like, soz too hairy for me… Get used to it. Pricks
Where did that decade go @kira247
Tasty times, tasty life
Spent my birthday evening chasing a possum around the pub. Unforgettable. Little fluffy prick come through the chimney (scared the hell out of me) and has been wrecking havoc for a few days. Tried to thieve bottle of Jack Daniels, smashed quite a lot of things 😂🤚 #onlyinaustralia #possumpub
Feeling 32twoooooooooooo! Beards getting so grey. And I kinda like it 🎈still screaming to the Dixie chicks 10 years later.
Best birthday seeing these legends!! @thekillers
Great evening up close and personal with @guysebastian and his amazing band!👏 👏
🏌️‍♂️⛳️🍹loved this mini galf! I won, obvs x @wtpgolfclub
Stunnin artist, stunnin songs, stunnin venue! Loved the Sad Boi Winter Summer tour! @deanlewis #sadboiwintersummertour2022 #Melbourne 💔❤️‍🩹🎶🎤
3 years on, I’m still very proud to be a face of Movember.. still face battles just different ones, and I choose them now.. @movember #movember
Bikini bottom down under Aussie bum. 😆 Who wore it better? @dualipa #aussiebum
Absolutely love having you in my country baby doll face! Always look forward to our catch ups! So proud of you! You’ve/we’ve only just begun having your/our fun!
My 2nd time & her 90th show of the #futurenostalgiatour this year! The Ultimate ticketek seat did not disappoint! Can proudly say I didn’t get into a sassy fight at this one 😂😂😂 what happened in Budapest stays in Budapest. @dualipa #futurenostalgiatourmelbourne #dualipa 💁‍♂️ #bornin1990

36 hours on the beautiful Mount Buller